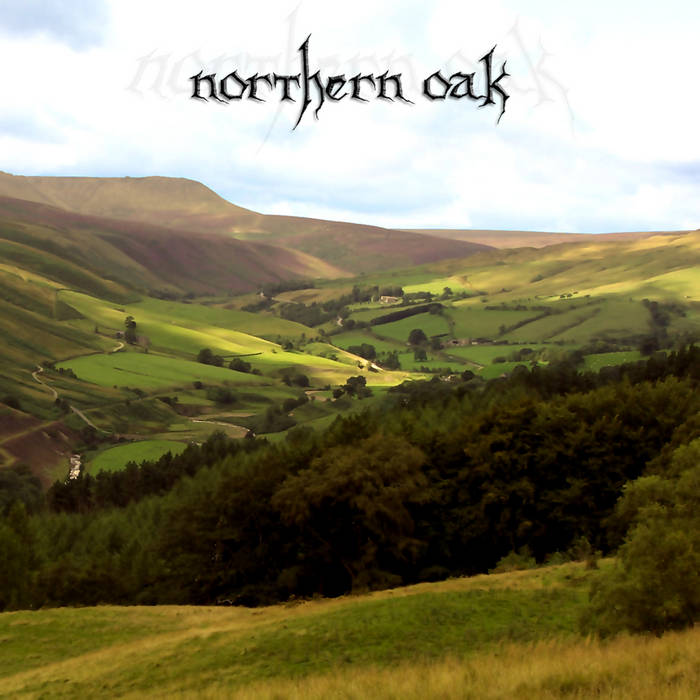 <B>Chris says:</B> This was one of Elliot's new songs, and is definitely one of my favourite songs to play, Northern Oak or otherwise- when the heavy guitar kicks in, there's an awesome build-up for a few seconds as the drums and everything spiral upwards, and then it all explodes outwards into double-bass and big, four-string power chords. Lyrically, it's about (somewhat obviously) the story of Gawain and the Green Knight. If you're not familiar with that tale, here it is in a nutshell:

King Arthur and his knights were all feasting and carousing at Christmas one year, when the door to the great hall slammed open and in walked a massive knight, completely clad in green from head to toe (a lot of pictures show him as having green hair and a green face, as well.) He challenged the assembled knights to a contest; that he would take any blow from their sword and, in a year's time, he would return the blow. The knights all looked askance at each other, until Gawain stepped forward, made the medieval equivalent of a 'yo momma' joke and cut the Green Knight's head completely off. Everyone laughed and went back to their dinner, until the Green Knight's body stooped and picked up his head, which winked at them all and said "See you in a year, mate!"

Gawain, determined to uphold the terms of the game, set off on a journey to find the Green Knight and receive a blow from him. En-route he finds a castle with a lonely queen living there (if you're wondering why this sounds like an Elliot song, it's because this kind of thing is his bread and butter :P) and a lord named Bertilak. They strike up a deal; Bertilak will give Gawain whatever he catches while hunting if Gawain gives him whatever he might gain during the day. To nobody's great surprise, Bertilak's missus starts kissing Gawain, so he ends up giving Bertilak the kiss when he returns home. This escalates until Bertilak's wife gives him three kisses and a green silk girdle which she says will protect him from harm.

Gawain comes across the Green Knight at the Green Chapel and kneels down to receive the blow. The Green Knight swings his axe three times, but flinches back on the first two and only connects on the third strike, and even then it only cuts very slightly. Then (to no-one's great surprise) the Green Knight reveals himself to be Bertilak, lord of the castle; the whole game was arranged by Morgan le Fay (for the lolz.) They part on good terms, and Gawain returns to King Arthur's court with the green girdle as a token of the adventure.

Our version of the tale is much abridged; instead of any kind of narration, Martin's lyrics instead examine how Gawain must have felt at various points of his journey. The loose 'narrative' of the song ends when Gawain reaches the Green Chapel and stands outside, preparing himself to enter.

Also, the only reason this version of the song is subtitled 'Green Knight Remix' is because on the first recording we did of the song (on Into The Attic), Wib's double-bass pedal had just broken so he was unable to give this song the thundering kick drum patterns that it so desperately longs for. As such, when we recorded this version (complete with lots and lots of orgasm-inducing double kick), I figured it'd be worth distinguishing it from the previous version somehow.

<B>Martin says:</B> When one of the band members brings a song to a practice they normally have a theme in mind and Elliot wanted this one to be about Gawain and the Green Knight. Although I had a vague idea of the legend I had to grab a few translations of the poem to really get to grips with it. The main problem however was how to condense the story into a song, as there is no way I would do the full story justice in 5 minutes. There is also the fact that with the story having simply been told so many times, the challenge is to build upon the framework and bring something new to the legend.

As I find it's the concrete details that really frame a piece for me, I chose to spend the initial verses with Gawain setting the scene (especially for anyone unfamiliar with the story) and then follow Gawain as far as the entrance to the Green Chapel where he expects the Green Knight to remove his head. I completely skipped the part about castles, kisses and girdles in order to focus upon Gawain's inner thoughts as he prepares to go to his death. A key tenet of the myth is Trawpe (pronounced trawff) which does not translate perfectly but is essentially the idea of being truthful to and honouring your pledged word, which is what drives Gawain to seek his demise.

An interesting aside is that in the French version of the tale, Gawain is actually a coward and someone to be derided; it's always interesting how one man's hero is another's fool.

Last Christmas at the feast at King Arthur's court
a monstrous figure entered dressed head to toe in green.
With a wicked blade in his hands he challenged us,
"Would the bravest knight take sport in an exchange of blows."

Arthur rose first but I quickly took the axe.
I could not risk Guinevere being left alone.
With one fell strike I cleaved the head from his shoulders
and had assumed myself free from reprisal.

But the courtiers' cheers quickly became cries,
as the corpse rose covered in its crimson.

"Gawain", it spoke, "seek me out in a year's time.
Come receive my blow or be known a defaulter."

The allotted time has passed.
I stand before the Green Chapel.
This is my last chance to turn back.
Though I appear resolute
my soul is uncontrollable,
like forked lightning down my veins.
Trying to escape the fate
of this doomed knight.

My king, I will not falter now.
I will leave no trawpe un-honoured.
No man will brand me coward.
If the Green Knight shall take my head,
then so be it...